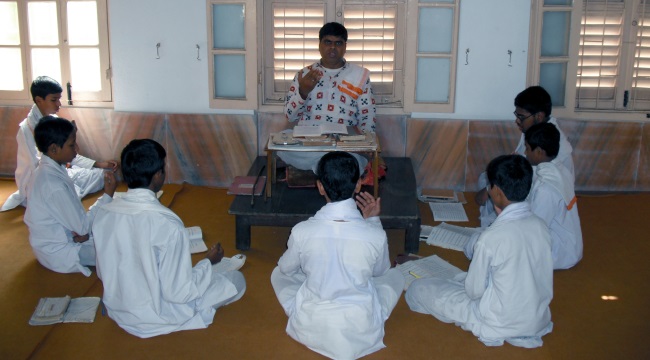 Swami Vivekananda, the foremost disciple of Sri Ramakrishna and a prophet of modern age, throughout his life, took special interest in propagating the message of the Upanishads. He prophesied on the day he passed away, that a Veda Vidyalaya would come up within Belur Math premises.

Establishment and the Location:

His solemn prophecy came true when the Vidyalaya started functioning on 16th August, 1993. The Vidyalaya is situated on the holy Ganges and the atmosphere here is surcharged with the spiritual presence of Sri Ramakrishna, a modern incarnation of God, in the shrine nearby at Belur Math. The Belur Math is a monastery founded by Swami Vivekananda way back in 1901. The place which is about 9km away from Kolkata is in the district of Howrah within the province of West Bengal in India.

The ultimate aim of human life is self-realization which can be achieved by building one’s character. The acquisition of true plays a vital role here. True education, further, gains ground when imparted in a congenial atmosphere. The Vidyalaya aims at imparting universal message of the Vedas by giving lessons to the students at their impressionable age. The objective is to remove superstition, ill-feeling and all weakening thoughts from people’s mind and promote brotherhood and solidarity on a spiritual basis.

Living in a place where a student is at liberty to do anything for serious studies. If a student resides in an institution under the able guidance of teachers who are both intellectually and spiritually competent, he becomes fit for receiving education. Our idea of a residential institution is rooted in this consideration and conviction. Hence the students of this Vidyalaya will have to stay within and no day scholar is allowed here. Along with character building physical, mental and spiritual developments are also kept as ideals of the Veda Vidyalaya. Cleanliness and self-reliance are also encouraged in the school.

In 1998 the Vivekananda Veda Vidyalaya got affiliated to the Rashtriya Sanskrit Sansthan, a deemed university under the HRD Ministry, Govt. of India.

Consequent upon the MOU signed between National Institute of Open Schooling, (NIOS) and Ramakrishna Math and Ramakrishna Mission on 6th August, 2014 for the purpose of promoting education particularly for underprivileged, marginalized and disadvantaged section of the society, Ramakrishna Math Vivekananda Veda Vidyalaya has been accredited as a Special Accredited Institution for Education of Disadvantages (SAIED) to work as a Study Centre of NIOS for Secondary and Senior Secondary (without Science, i.e. without Physics, Chemistry and Biology) from academic session 2014-15. Study Centre number is SAIED – 450159

The school is set in the idyllic surroundings. It has a wide campus, a library that caters to the needs of the students, and a hostel on the first floor. In addition to the regular courses, the students learn traditional Vedic accent which is becoming obsolete. Further, the students familiarise themselves with the universal truths contained in the Vedas. Computer literacy too is promoted to the students. Thus the syllabus is a happy blend of tradition and modernity.